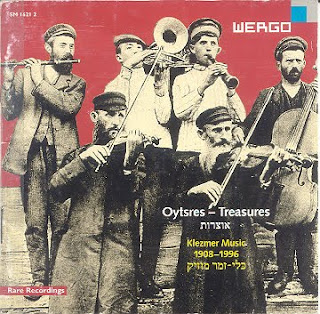 "In this period of rediscovery, revitalization and reinterpretation of music of the Jewish people of pre-Holocaust Europe, occasional infusions from the source help keep the music centered. In this latest klezmer anthology, producers Joel Rubin and Rita Ottens have included six rare examples of pre-World War I recordings from Europe. These include a couple of pieces from the Euro-Yiddish theater that have some melodic relationship (but not in presentation) to klezmer. Additionally there are two fascinating pieces by the State Ensemble for Jewish Folk Music of the Ukraine recorded in 1937 and 1939, along with one example of an obscure offshoot of the klezmer tradition, that of the Chassidic community in Israel. It will be very instructive to all fans of klezmer to compare the playing styles of these with that of musicians who recorded in America between the world wars. The greats of the first generation emigres to the United States are also here: Naftule Brandwine (fabulous, as usual), Dave Tarras (an example of his influential trio), Abe Schwartz, etc. This is another must-have for fans and students of old style klezmer music." - Stacy Phillips [ thanx to GhostCapital]